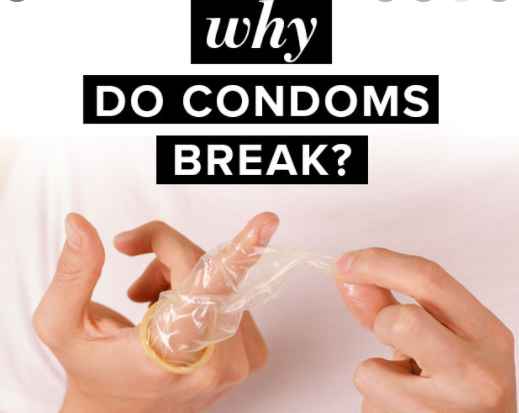 Often, a couple will not notice that a condom has ruptured until after sex. However, if you become aware that the condom has broken during sex, immediately stop and replace it.

If the condom ruptures, if you are pregnant or suspect pregnancy, contact your doctor, nurse practitioner, or local health clinic immediately to inquire about emergency contraception.

Teens over the age of 15 can purchase emergency contraception pills (morning-after pills) at a pharmacy.

To determine who is qualified to provide or prescribe ECPs in your area, visit the website of The Association of Reproductive Health Professionals. Emergency contraception is most effective when used immediately following intercourse, but can be used up to five days following unprotected sex.

It is prudent to have both you and your partner tested for STDs. Individuals are frequently unaware that they have an STD. However, if an infection is not treated promptly, it can result in serious complications.

To avoid condoms breaking, store them away from heat and light, avoid carrying them in a wallet, avoid opening them with anything sharp (such as scissors or teeth), and avoid applying oils or lotions to them.

What To Do If Condom Breaks

While it’s upsetting when your condom breaks or slips off, there is still something you can do to avoid pregnancy:

After unprotected sex or a condom mishap, emergency contraception (such as the morning-after pill) can help prevent pregnancy.

Additionally, you and your partner should be tested for STDs a few weeks after the condom ruptured.

When a condom ruptures, it exposes you to sexual fluids that can spread STDs. And, in the majority of cases, STDs are asymptomatic.

As a result, testing is the only way to determine for certain whether you have one. If you have sex, it’s a good idea to get tested for STDs on a regular basis — and following a condom break is an excellent time for your next test.

Generally, condoms do not break and are effective at preventing pregnancy and STDs.

Additionally, using condoms properly can help prevent them from breaking. However, accidents do happen, and it’s a good idea to have a plan in place in the event of a condom mishap.

Planned Parenthood health centers can assist you in obtaining emergency contraception and STD testing, as well as answer any questions you may have.

How likely is it to get pregnant if the condom breaks?

Condoms are 98 percent effective, which means there is a 2% chance of becoming pregnant while using one.

This can occur if the condom breaks and you do not have a backup method of birth control.

Can a guy feel when a condom breaks?

Men who are wearing condoms should be able to tell when they rupture — they should experience a change in sensation.

Because their partners may not be able to tell the difference, they bear the responsibility.

Can you get pregnant if the condom breaks but he pulls out?

Is it Easy To Notice When Condom Breaks?

A break should be visible or felt. However, many people are unaware that a condom has broken until they have finished having sex.

That is why it is critical to inspect the condom upon removal for obvious holes or leaks.

Should I be worried if the condom broke?

However, if you become aware that the condom has broken during sex, immediately stop and replace it.

If the condom ruptures: If you are pregnant or suspect pregnancy, contact your doctor, nurse practitioner, or local health clinic immediately to inquire about emergency contraception.

Condom mishaps can take on a variety of forms. You may notice a rip or tear in the condom as you withdraw it or as you remove it from your penis. 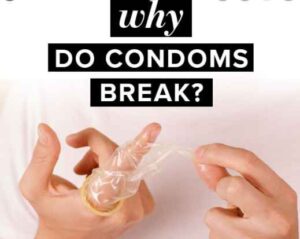 How Can You Remove A Broken External Condom From The Vagina Or Rectum?

Remove as much semen as possible from the vagina or rectum. You could squat and push as if you were having a bowel movement.

Additionally, you can sit on the toilet and bear down. Following that, gently clean the genital area with soap and water.

Yes, condoms can break without you realizing it — but this is extremely rare. How to Avoid It

You are not the only one who has had a condom rupture on them. In a previous study, 7.3 percent of men surveyed reported experiencing a condom break over the course of a year.

However, there is some good news: If the condom ruptures, you will almost certainly know about it. Generally, when condoms rupture, they rupture completely.

When you or your partner pull away, you’re likely to feel it snap or see the damage. Having said that, it is possible for a condom to rupture without your knowledge — but try not to be too concerned. This is extremely rare, especially if the condom is used and stored properly.

If you’re in a hurry, here’s how to visually inspect for obvious breakage. When putting on the condom, it’s a good idea to quickly inspect it. Condoms occasionally rupture during packaging or insertion.

Typically, if you are the one wearing the condom, you will feel it break. There will be an immediate sensational shift. If this occurs, inform your partner and remove and inspect the condom.

In this case, it’s a good idea to check the condom periodically during sex — for example, when changing positions. A break should be visible or felt.

However, many people are unaware that a condom has broken until they have finished having sex. That is why it is critical to inspect the condom upon removal for obvious holes or leaks.

After all, that thin sheath may be the only thing standing between you and your partner and contracting a sexually transmitted infection, becoming pregnant, or both.

As frightening as it may be, dealing with the situation promptly may reduce the likelihood of a serious outcome. 2 At the very least, now is an excellent time to review how to properly select and use external or internal condoms in order to avoid this problem in the future.

Immediate Steps to Prevent a Condom from Breaking

If an external or internal condom ruptures during sex, immediately stop. You and your partner must consider the following:

Is the external condom still on the penis or is it inside the vagina or rectum?

Were you just getting started with sex or were you on the verge of ejaculation?

Was the rupture caused by ejaculation?

If the condom ruptured following ejaculation, it is possible that semen or other bodily fluids were exchanged.

Remove as much semen as possible from the vagina or rectum. You could squat and push as if you were having a bowel movement. 3 Additionally, you can sit on the toilet and bear down.

Following that, gently clean the genital area with soap and water. Avoid rinsing, scrubbing, or using abrasive cleaners or disinfectants.

Douching can deplete the vagina’s protective bacteria. Additionally, it has the potential to cause tissue damage.

Additionally, using a disinfectant can cause cell damage. Harsh chemicals can cause inflammation, which increases your risk of contracting HIV.

If you believe fluids have been exchanged and you are unsure of your or your partner’s HIV status, the best course of action is to take your partner to the nearest clinic or emergency room (ER).

This step is even more critical if you are aware that one of you is HIV positive.

Explain what happened to the ER doctor or nurse. You’ll almost certainly be given a rapid HIV test to determine whether you or your partner are HIV positive.

Even if your initial tests are negative, your doctor may begin you on a 28-day antiretroviral treatment course.

Additional HIV testing will be sent, which may take a few days to complete. With or without a negative test result, the medication is started to prevent the virus from spreading within the body. When used to avoid HIV infection, it is referred to as HIV post-exposure prophylaxis therapy (PEP). 4

Typically, patients are treated with a combination of Truvada or Descovy (emtricitabine and tenofovir) and Isentress (raltegravir) or Tivicay (dolutegravir).

PEP should ideally be initiated within 24 hours of possible HIV exposure. If prescribed within 48 (and possibly 72) hours of exposure, it is frequently still effective.

Pregnancy is another possibility if an external or internal condom breaks and you are not using another method of contraception.

If you find yourself in this situation, emergency contraception can help you avoid becoming pregnant.

There are two primary options, which include the administration of two “morning-after” pills and the insertion of a copper intrauterine device (IUD) within five days of the scare. IUDs are T-shaped devices that are inserted into the uterus or womb to prevent sperm from fertilizing an egg.

The Plan B One-Step (levonorgestrel) pill is a progestin. It is available over the counter. It works by preventing your body from releasing an egg or from fertilizing an egg with sperm.

It is a single-dose contraceptive pill that must be taken within 72 hours of conception. Plan B One-Step is available in several generic forms, including Next Choice One Dose, AfterPill, My Way, and Take Action.

Ella is another one-dose contraceptive (ulipristal acetate). This medication requires a prescription.

It works by either delaying or preventing the release of an egg or by altering the uterine lining. It should be taken within five days, but the sooner the better.

Ella for Contraception in an Emergency

This contraceptive device is copper-encased. It gradually absorbs minuscule amounts of the mineral into your body.

A copper IUD prevents pregnancy by preventing sperm from reaching an egg. Additionally, an IUD alters the uterine lining.

ParaGard can reduce the risk of pregnancy by 99.9 percent when inserted by a doctor within five days of unprotected (or condomless) sex.

How to Prevent Condom Breakage

Utilize the following tips to minimize the risk of a torn condom:

Never use an external condom that has expired or has been stored in extreme heat or cold (such as a wallet or the glove compartment of a car).

Contrary to popular belief, do not double up on external or internal condoms. Wearing two at the same time creates friction, which can result in one of them breaking.

Never use lubricants based on oil, such as Vaseline, and stay away from spermicides containing nonoxynol-9.

They have the potential to irritate vaginal and rectal tissues. 5 Utilize an approved water- or silicone-based lubricant liberally.

Summary If an external or internal condom ruptures during sexual activity, you can take steps to avoid pregnancy and protect yourself against HIV.

The first step is to attempt to eliminate any remaining bodily fluids without resorting to harsh chemicals or douches.

The next step is to seek HIV testing at a clinic or emergency room. If you have been exposed, your healthcare provider may prescribe antiviral medication to help you fight the virus.

The critical point is to act quickly. Certain medications are only effective if taken within hours or days of an external or internal condom breaking.

What does an external condom look like when it is broken?

While an obvious rip is easy to spot, smaller tears may be more difficult to detect. If you’re concerned about a broken external condom, check to see if any sperm has escaped. 6

How can a broken external condom be removed from the vagina or rectum?

It is safe to reach in with clean fingers and pull out the external condom. It will be simpler if you relax your muscles first. If you are unable to reach it, a doctor can locate and remove it using a narrow tool.